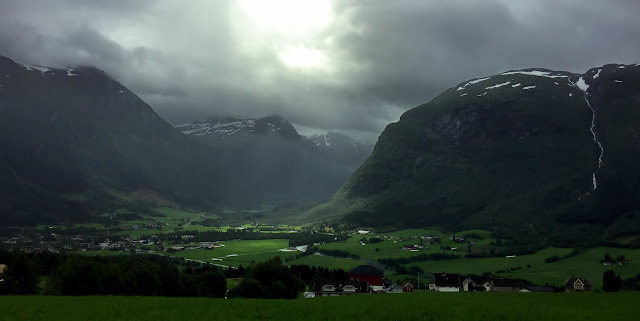 The village Byrkjelo is not directly by the sea but some kilometers inland. With the dramatic setting between some mountains and the grey sky this day it sure was easy to think some connections far back in time - 1200 years back to around 800 AC when the Vikings was in their prime time raiding over the North Sea to the British Isles. It must have been fantastic to break out of such places locked in by the mountains and enter a longship to explore the big world.

Some more viking stuff from the net:
Think of the Vikings and it's not poetry, woodcarving and storytelling that spring to mind, but colourful images of horned helmets, berserkers, longships, Valhalla, the one-eyed god Odin and men dying sword in hand or drinking out of skulls.

And it’s true, the Vikings were pirates who came to plunder and kill, and they spread terror along Europe's coasts. But their reputation is not entirely fair: They were not just ruthless warriors, but also skilled traders, administrators and craftsmen in metal and wood, producing beautiful jewellery and artefacts that survive to this day.

The Vikings were also some of Europe's best storytellers and the Norse sagas continue to fascinate modern audiences. And, by the way, they did not have horned helmets: No self-respecting Viking would want to look like a cow.