In the end of the world: Svalbard, Norway 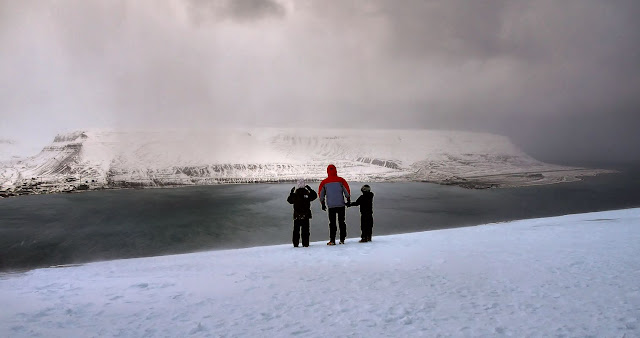 I am standing a bit North of Thomas and his 2 children making this photo.

For all I know I can be the person closest to the North Pole in the world (but of course there is probably some people around the Pole point - maybe some scientists).

We are looking over the Isfjorden to Longyearbyen that can be seen to the left in the photo. To the right you can see the runway at Longyearbyen Airport.

We are on the top of Mont Hiorthfjellet where we arrived with a brand new SnowCat in company of some 20 other visitors. The weather was not the best with whipping wind and a small snow blizzard.

A SnowCat with Explorers at the top of Mount Hjorthfjellet - Svalbard, Norway

We have taken the brand new SnowCat up the mountainside of Hjorthfjellet right opposite of the "capitol" Longyearbyen and the big fjord Isfjorden.

The snowCat was just delivered to Spitsbergen Travel our tour operator and was filled with "explorers" this day. Beside of some Norwegians you can to the left see a well "packed" lady from Lyon, France and to the right a small group from sunny Australia doing some souvenir photos of the event.

Unfortunately not the best weather this March afternoon - but maybe a snow blizzard and some wind adds to the spectacle of being up here.

Below from another stop with the SnowCat at the permafrost of the moors in the end of the Adventsfjorden - on our way back to Longyearbyen.

The Arctic Reindeer at Svalbard, Norway 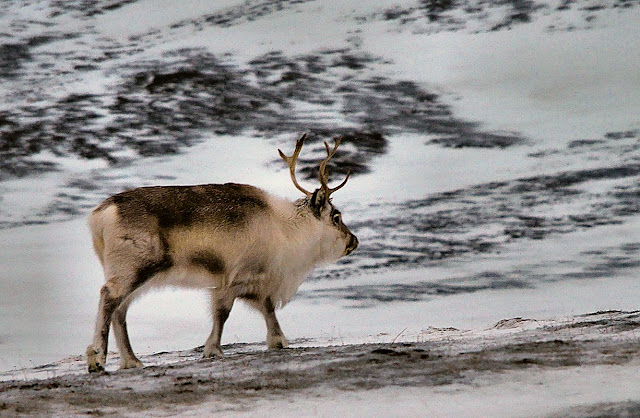 During our days at Spitsbergen, Svalbard we did not meet the Polar Beer - but did see some Reindeers scattered around.
The reindeers up here have shorter legs and necks and looks more like a "ball" than the ones we find in the mainland of Norway. Surely due to a much tougher climate.

Svalbard Reindeer (wiki):
The Svalbard reindeer (Rangifer tarandus platyrhynchus) is a reindeer subspecies found on the Svalbard archipelago of Norway. They are the smallest subspecies of reindeer. Males average 65-90 kg in weight, females 53-70 kg,while for reindeer generally body mass is 159–182 kg for males and 80–120 kg for females.
The subspecies is endemic to the Svalbard islands, where it has lived for at least 5,000 years, and become well adapted to the harsh climate, being found on nearly all non-glaciated areas of the archipelago. It is the most northern living herbivore mammal in the world.


They remain short-legged and have a relatively small, rounded, head. Their fur is also lighter in colour and thicker during winter.The thickness of the coat contributes to the short-legged appearance and makes even starved animals appear fat in the winter. The males develop large antlers during the period from April to July and shed the velvet during August-September. Males lose their antlers in early winter. Females develop antlers starting in June and they are usually retained for a whole year.
No comments:

How to park a dogsled at Svalbard, Norway 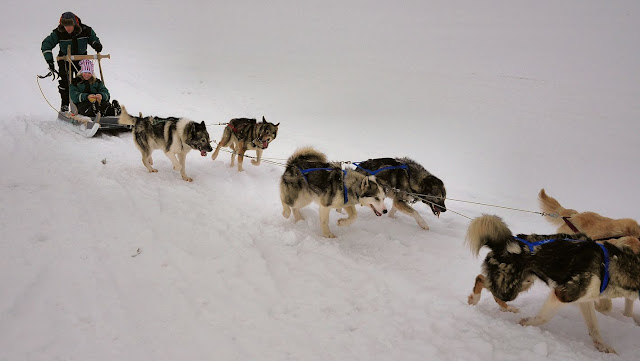 After a 3hrs tour with 6 dogs from Green Dog in Longyearbyen at Spitsbergen Thomas and Milla is returning with their dogsled.

The eager dogs are still pulling at full while Thomas is having a foot on the brakes to slow down and stop the dogs.  You can see in his right hand that he is holding the anchor which must be placed in the snow to keep the dogs in place after they have stopped. Simple as that.

The Green Dog do two such trips twice a day in the season mainly for people with no experience from dogsleds - and usually everyone come back full of enthusiasm for the experience.
Some instructions before the tour is all training needed.
And of course both Thomas and Milla is dresssed in Thermodresses from Green Dog to keep them warm in the cold Arctic day.

Finally the dogs have to be returned to their small "houses" at the kennel - as Milla is doing right here: 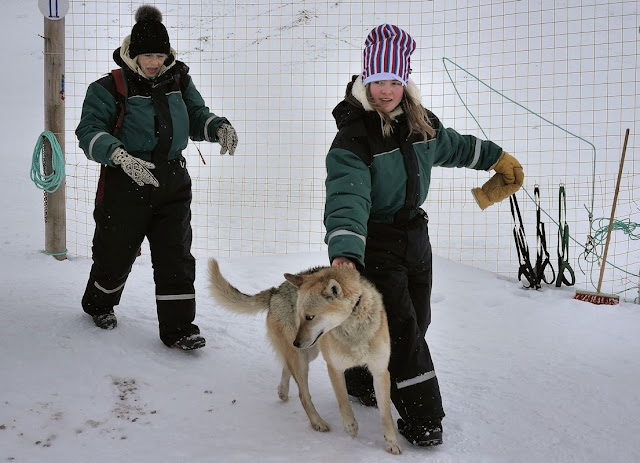 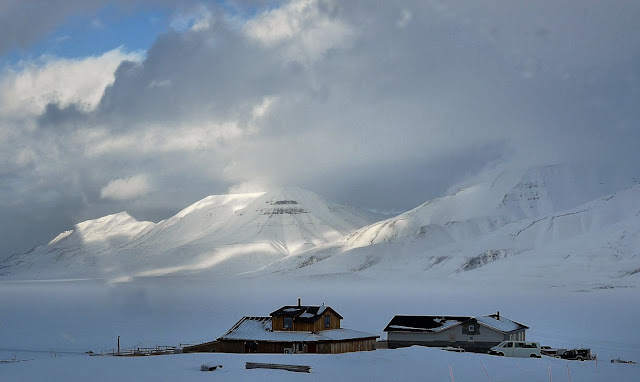 In the afternoon, on our way home, we pass another dog kennel on route to Longyearbyen, the small village and "capitol" up here in the Arctic landscape at Svalbard.

There is some 2.000 inhabitants living here and of course som 1.000 dogs: Alaskan huskies and the larger Greenland dogs. The dogs in full swing pulling their sleds for all the tourists coming up to this Arctic landscape of snow and darkness.

Arctic Panorama from a dogsled at Spitsbergen, Svalbard, Norway

We are in Bolterdalen driving a dogsled lead by 12 Alaskian  Huskies. (Click at the photo for a LARGER version).
The sun is shining at the Opera Mountain in front while we can see some structures to the right belonging to coal mine 7. Bolterdalen where we have a photo break is still in the winter shadow of the surrounding mountains.

Opera mountain where a tragic flight accident happend in 1996 (ref. wiki):
Operafjellet ("The Opera Mountain") is a mountain on Spitsbergen in Svalbard, Norway. It is 968 metres (3,176 ft) tall and is located on the north side of Adventdalen.
It is named for the amphitheatre-shape of the mountain on the western side, with the peak Tenoren ("The Tenor") sticking up.
On 29 August 1996, it was the site for the crash of Vnukovo Airlines Flight 2801 during approach to Svalbard Airport, Longyear, killing 141 people.

Coal mine 7 and the Mining company at Svalbard:
Store Norske Spitsbergen Grubekompani AS (SNSG) operates Store Norske’s three coal mines on Svalbard: Svea Nord and Lunckefjell in Svea and the Gruve 7 mine outside Longyearbyen.

SNSG has 320 employees and a head office in Longyearbyen. Most of the company’s employees work in Svea

At Spitsbergen, Svalbard, Norway: Sunrise and sunset within 30 minutes 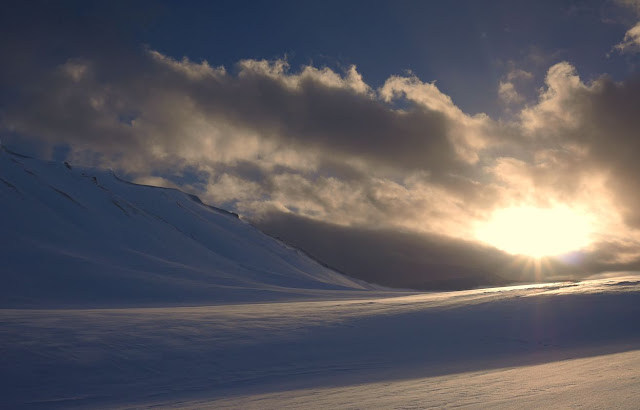 We are out traveling with a dog sled in Bolterdalen at Spitsbergen.
When suddenly there is a sunrise and then half an hour later there is a sunset.

At Svalbard 78DEG North and neighbor to the North Pole they have not had sun since the end of October last year  - but in this week in March the sun was back - at least for a very short time.

Nature begins to prepare for the midnight sun coming in June.
What a world.

BTW Maybe this photo was a bit overexposed - but believe me shooting from a dog sled, with 12 Alaska Huskies in full speed, with fingers hardly flexible at all from the cold you just skip the finer details of adjusting your camera settings.....
No comments:

At a dogsled in Bolterdalen. Svalbard. Norway 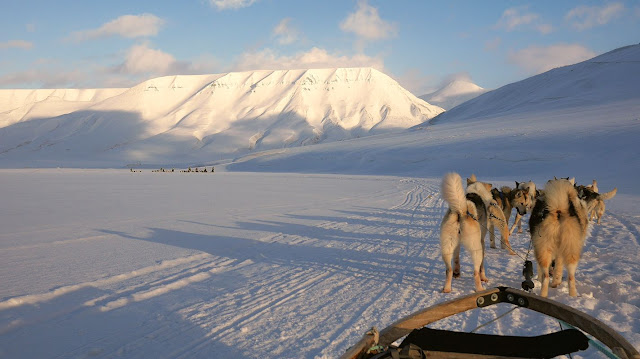 Probably your most environmental friendly transport to have: 12 Alaskan Huskies pulling you around Bolterdalen outside Longyearbyen at Spitsbergen - Svalbard - this fine day in March.

In the back the Opera Mountain.  The flat summit as this was former a seabed that later was elevated to that level.
This Arctic island is only 1.000km away from the North Pole and the last populated place before the Pole itself.

It is late afternoon - kind of a blue hour - when we pass those huge satellite dishes up in a mountainside someplace outside of Longyearbyen at Svalbard in the Arctic Norway.

BBC have some additional info at the net:
Scientists in the Arctic have launched an urgent investigation into how solar storms can disrupt sat-nav.

Studies have revealed how space weather can cut the accuracy of GPS by tens of metres.
Flares from the Sun interact with the upper atmosphere and can distort the signals from global positioning satellites.

The research is pressing because rapid warming is attracting more vessels, tourists and mining operators.

The project is under way at a remote observatory on a windswept mountainside in the Norwegian archipelago of Svalbard in the High Arctic.

But the scientists are hoping to understand the impact on satellite signals and then to try to develop a system for forecasting the most damaging effects of space weather.
The site was chosen for its isolation from electronic pollution and for its position in relation to the Earth's magnetic field which flows from space down towards the far North.

Violent solar activity has long been known to pose risks to satellites in orbit and to electricity networks. Aircraft flight-paths are usually altered to avoid the most northerly areas.

For more details go to the interesting WEB page: 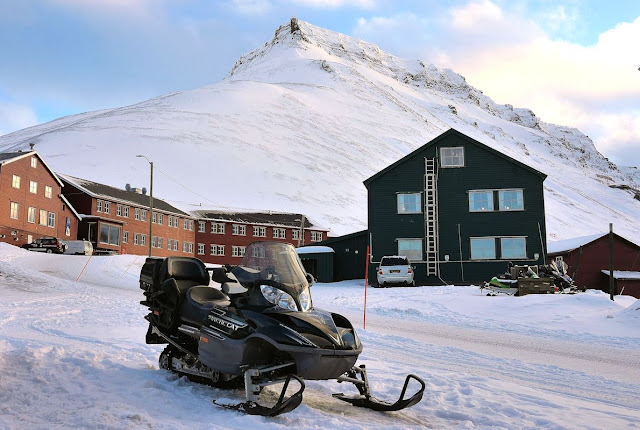 With app. 50km road around Longyearbyen in the Arctic Svalbard at 78 deg North there is not much to do with a car - but then a Snow Scooter is the thing. There is endless places to go. Just load up a signal gun and a Rifle . to avoid becoming lunch for a Polar Bear. Important at a place where there is more polar bears than people....

There is app. 2.000 snow scooters at Svalbard and the same number of people living there. 1 scooter pr. capita - have a nice drive......

This photo is from Longyearbyen with Spitsbergen Hotel (Funken) in the back.

The first days of sunlight this season (medio March) is seeing on the mountainside opposite the small town Longyearbyen at Svalbard .  The settlement itself is still in the shadow from mountains in the back of town.  In front we have the city center with a small shopping arcade, hotels and a mini university.

From wikivoyage:
Longyearbyen is the largest populated settlement on the Svalbard archipelago, located in the high Norwegian Arctic. The settlement is generally regarded as the northernmost town in the world as well as the most easily accessed frontier in the Arctic, and is an ideal base for the greater exploration of Svalbard and the high Arctic.

The settlement is named after American entrepreneur John Munro Longyear (1860-1922), who as head of the Arctic Coal Company founded the town and the neighboring coal mine, the first large mine on Svalbard.

With approximately 2,000 inhabitants, the town is the de facto "capital" of the islands, and is today a vibrant, modern, and international settlement with much of the character of mainland Norwegian towns. It features an airport, a school, a shopping center, hospital, hotels, restaurants, and a university. People from approximately 40 different countries call Longyearbyen home, and this is reflected in the events offered in the town. 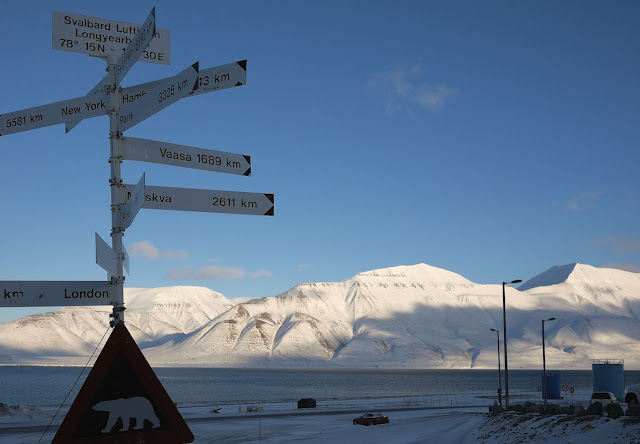 After many months with winter darkness - at 8th. of March the sun can again be seen in the fantastic Mountain landscape at Svalbard. We arrived a few days later and was met by some sun at the airport. Longyearbyen the last town before the North Pole. 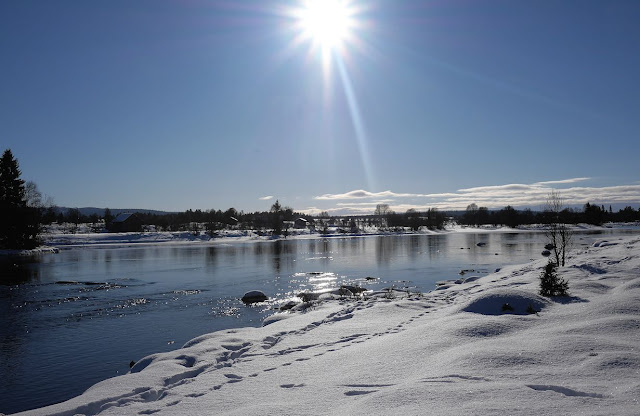 Tisleia river in the winter with fresh tracks from a passing Moose and a Fox along the river banks.
No comments:

Skiing down to the valley. Tisleidalen in Valdres, Norway 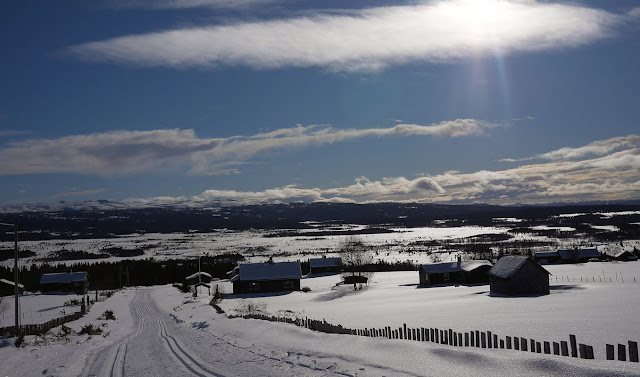 After a day in the cross country tracks up in the mountain it is welcome to go back by the slopes down to the valley. In this photo cottages and summer mountain farms at Floten in Valdres, Norway 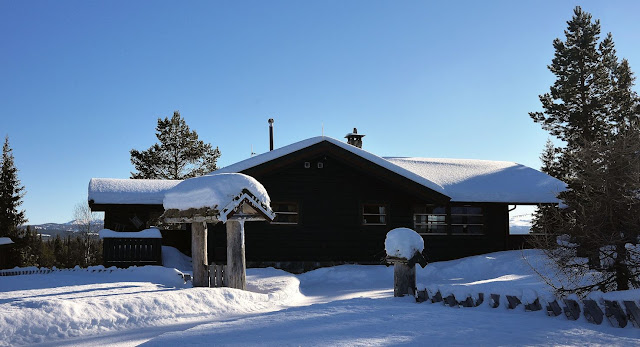 App. 20 year old cottage in Valdres, Norway.
Simple design with no electricity other than solar power and no water in house.
But fully designed for overnight stays down to -40 C/F in the winter