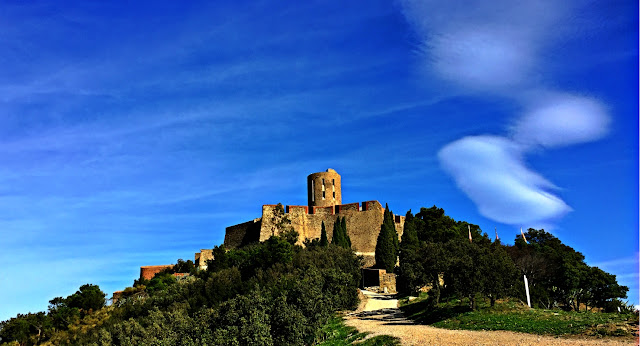 Majestetic placed on this hill overlooking Collioure and Port-Vendres: Fort St.Elme.
The fort have a long history with the Spanish, the Catalans as with the French.

From the net, some "newer" historie:
Despite the latest modernisation and its adaptation to the artillery, on 13 April 1642, French troops of king Louis XIII achieved to take the fort. After the signing of the Treaty of the Pyrenees in 1659, the Spanish threat remained. When Vauban, military architect of King Louis XIV, made a reconnaissance of the defensive structures in 1659 in the region of Collioure, he decided to build a counterscarp, which forms with the ramparts base a ten-meter pit where infantry and cannons could easily operate.

Around 1780, the fort’s facade was whitened to serve as landmark from the sea, with the Massane Tower, to better situate the port of Port-Vendres.


During the French Revolution, more precisely during the War of the Pyrenees, between 1793 and 1795, the region was the center of violent fights. The Fort Saint Elme was conquered successively by Royalists and Republicans. In 1794, the Spanish army took the fort. Six months later, the general Dugommier crushed with 11 000 cannonballs the garrison which surrendered on 25 May 1794 after a 22-day siege. After the revolutionary period, the fort, unified with the municipality of Collioure, was transformed in military warehouse. (Ref: WIKI)