Return of a Catalan barque in the afternoon. Collioure. France 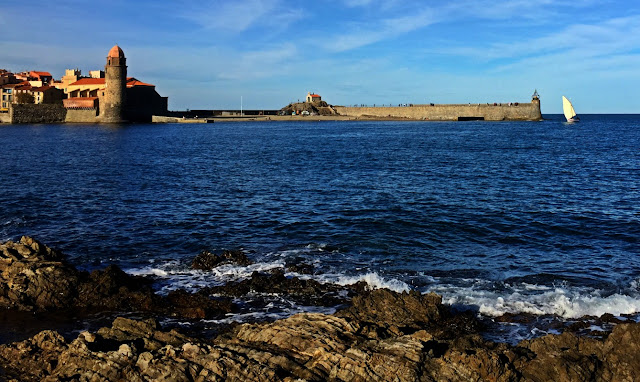 November afternoon in Collioure. South of France. A lone Catalan barque returns to its harbour in this little Catalan (French) village.
(iphone6+)

Some more from the net:;
The Catalan traditional fishing boats or "barques" ("llaguts" in Catalan), are as old as
the Mediterranean civilisation and boast a superb lateen sail, which gives them
unparalleled elegance.

Despite its rudimentary simplicity, this rig works wonders in the Mediterranean since
time immemorial. Greeks and Romans used it in their galleys, and the Barbary pirates
equipped their speed boats to board their enemies. It is this system which is still used
today on the fragile Nile feluccas and the Maltese ferillas.

The Catalan barques are built here, in the Pyrénées-Orientales. Banyuls, Collioure, Le
Barcarès used to have their shipyard on the beach or the dock. They brought life to
ports, they were their lungs and heart.

At the beginning of last century Collioure had, for example, a fleet of one hundred
"sardinals" (sardine-fishing boats) which employed more than 700 sailors. The port
also included over 20 salting workshops, fifteen shippers, coopers... The arrival of the
diesel engine of course transformed the "great Catalans", and sails were used only
occasionally. They faded in the '60s with the arrival of more modern and powerful
trawlers.