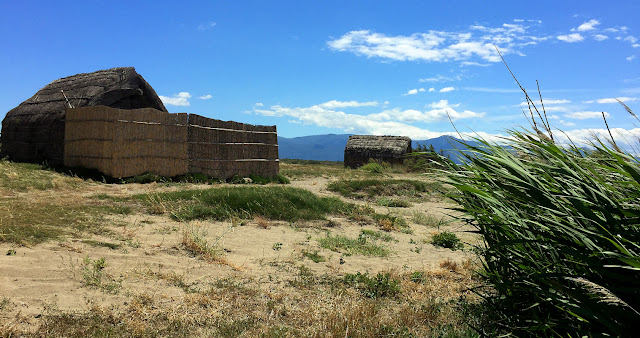 Just inside the coastline on either side of Canet-Plage, there are the large lagoons. These are now protected natural spaces, where members of the public can go (ideally on the well-maintained special cycle routes) to see the huge variety of natural wildlife, which includes the local rosé-coloured flamingos. You can also see the traditional fishermen’s huts along the shoreline of the nearest on, the Etang de St Nazaire. They were constructed using a variety of reed that grows traditionally on the lagoon. They have almost no windows and were used as homes by the fishermen up until the 1950s. Now, they are mostly used for storage by the ten fishermen that are still licensed to fish the lagoon.

In fact, centuries ago, Canet-en-Roussillon was a walled fortress of a city that profited from trade along its route as part of the Catalan kingdom.
That particular era of financial prominence ended when feudal France took over from the kings of Catalonia and Majorca and Louis XIV ordered all city walls in the area to be dismantled in 1645.

In the last century, the beach extension of Canet-Plage was created. Up to that point, there were no tourists along this stretch of coastline. People went much further east to places like Nice or west to the resorts of the Atlantic coast. The Catalan coastline was a place only for local residents and fishermen on the lagoons. It was all quiet and traditional, smelling strangely and plagued by mosquitoes.