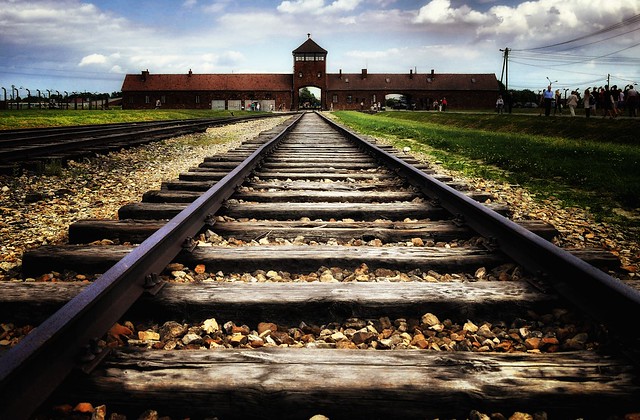 The Nazi ambition to free Europe for Jews, Gypsis and other non Arians during WWII was in it's prime time in May 1944 when the new logistic advancement in these camps was having the railway lines ending right inside the wired gates of Birkenau.

After sorting and selecting the new arrivals - the most unfortunate, elderly women, men and children under 14 years of age could be marched no more than 300 meters to their final douche - a dose of the deadly gaz Zyklon-B and the immediate cremation in the fires of Birkenau. While the "lucky" one's could look forward to an average life span of 3 months before ending their life in the same way.

It makes your hair raise bending down between the rails on this place of ultimate terror, for making your photo and memorial from visiting this place, even on a sunny day 70 years later.

There were up to seven gas chambers using Zyklon-B poison gas and three crematoria. Auschwitz II included a camp for new arrivals and those to be sent on to labor elsewhere; a Gypsy camp; a family camp; a camp for holding and sorting plundered goods and a women's camp. Auschwitz III provided slave labor for a major industrial plant run by I G Farben for producing synthetic rubber (see Blechhammer). Highest number of inmates, including sub-camps: 155,000. The estimated number of deaths: 2.1 to 2.5 million killed in gas chambers, of whom about 2 million were Jews, and Poles, Gypsies and Soviet POWs. About 330,000 deaths from other causes.

In April 1940, Rudolph Höss, who become the first commandant, identified the Silesian town of Oswiecim as a possible site for a concentration camp. The function of the camp was initially to intimidate Poles and prevent resistance to German rule. It was also perceived as a cornerstone of the policy to re-colonize Upper Silesia, which had once been a German region, with 'pure Aryans'. On April 27th, Himmler ordered construction of the camp.

Himmler visited Auschwitz in March 1941 and commanded its enlargement to hold 30,000 prisoners. Himmler also ordered the construction of a second camp for 100,000 inmates on the site of the village of Brzezinka (Birkenau), roughly 4 km from the main camp. This massive camp was intended to be filled with captured Russian POWs who would provide the slave labor to build the SS 'utopia' in Upper Silesia. The chemical giant I G Farben expressed an interest in utilizing this labor force, too. Extensive construction work began in October 1941, under terrible conditions and with massive loss of life. About 10,000 Russian POWs died in the process.

The Death Factory... (1945)
The main camp population grew from 18,000 in December 1942 to 30,000 in March 1943. In July or August 1941, Himmler briefed Höss about the 'Final Solution'. On September 3th, 1941, Soviet POWs at the Auschwitz main camp were used in trials of the poison gas Zyklon-B. This poison gas was produced by the German company "Degesch" (Deutsche Gesellschaft zur Schädlingsbekämpfung). The were gassed in underground cells in Block 11. After this trial, a gas chamber was rigged-up just outside the main camp and in February 1942, two temporary gas chambers opened at Birkenau. The crematories were built by the German company "Topf & son" located at Erfurt.

...a system operated later at Birkenau in 1942-43, except that for the majority the 'showers' proved to be gas chambers. Only about 10 percent of Jewish transports were registered, disinfected, shaven and showered in the 'central sauna' before being assigned barracks. In May 1944, a spur line was built right into the camp to accelerate and simplify the handling of the tens of thousands of Hungarian and other Jews deported in the spring and summer of 1944.</> 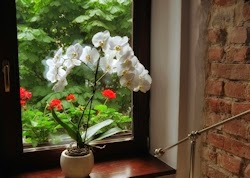