ON TOUR - going from Lyon to Avignon in France 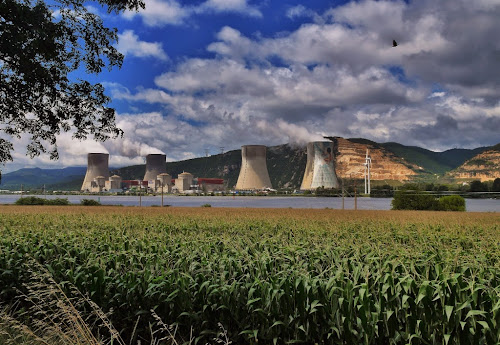 The distance was a little less than 250km and by that I decided to go by the National route instead of the motorway. It included passing loads of villages and a zillion roundabouts...
Right outside Montelimar I also passed this huge atomic power plant at Cruas.
WIKI:

The Cruas Nuclear Power Station is a Nuclear power plant located in Cruas and Meysse communes, Ardèche next to the Rhône River in France. The site is 35km north of Tricastin Nuclear Power Center and near the town of Montélimar.

The power station accounts for 4 to 5% of the electric energy production in France, and 40% of the annual usage by the Rhone-Alps area. The site employs about 1,200 workers and has an area of 148 hectares. Cooling water comes from the Rhône river.

On 1 December 2009 reactor 4 was shut down after vegetation blocked the intake of the cooling system. The nuclear safety authority Autorité de sûreté nucléaire (ASN) classified the incident as level 2 on the International Nuclear Event Scale [1][2][3]

On December 5, 2011, two anti-nuclear campaigners breached the perimeter of the Cruas Plant, escaping detection for more thann 14 hours, while posting videos of their sit-in on the internet.

On the big cooling tower to the right there is an enormous painting underlining the environmental aspect of this power plant (!?) 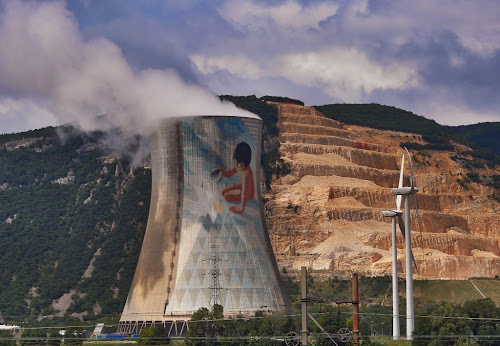 WIKI: Mural
In 1991 it was decided by the owners of the plant to carry out a Mural project on the cooling towers focusing on the topic of ecology. Author of the mural on the Tignes Dam, Jean-Marie Pierret was selected to design the painting, 9 mountaineers helped to actually paint the structure. The painting reflects the basics of Water and Air and is titled Aquarius, and was inaugurated in 2005. It took 8,000 working hours and 4,000 liters of paint to complete the project.