Arvika, Sweden - a February visit to a small Swedish township in Warmland

Arriving at the Travel Center of Arvika

I visited the small place Arvika this winter day in February. A fine opportunity for having a walk around this small township with some 15,000 inhabitants. You can maybe as I have some feeling of the spirit of the place reading this from wiki:

"The town was a village until 1811 when it was given town privileges by royal charter under the name Oscarsstad in order to improve the economy of the area. This attempt was unsuccessful, and the town privileges were repealed in 1821 and the town was instead given the status of köping (township) and renamed Arvika. The town privileges were reinstated at the founding centennial in 1911, and the name Arvika remained. The city status is now obsolete, but Arvika is since 1971 the seat of the larger Arvika municipality." 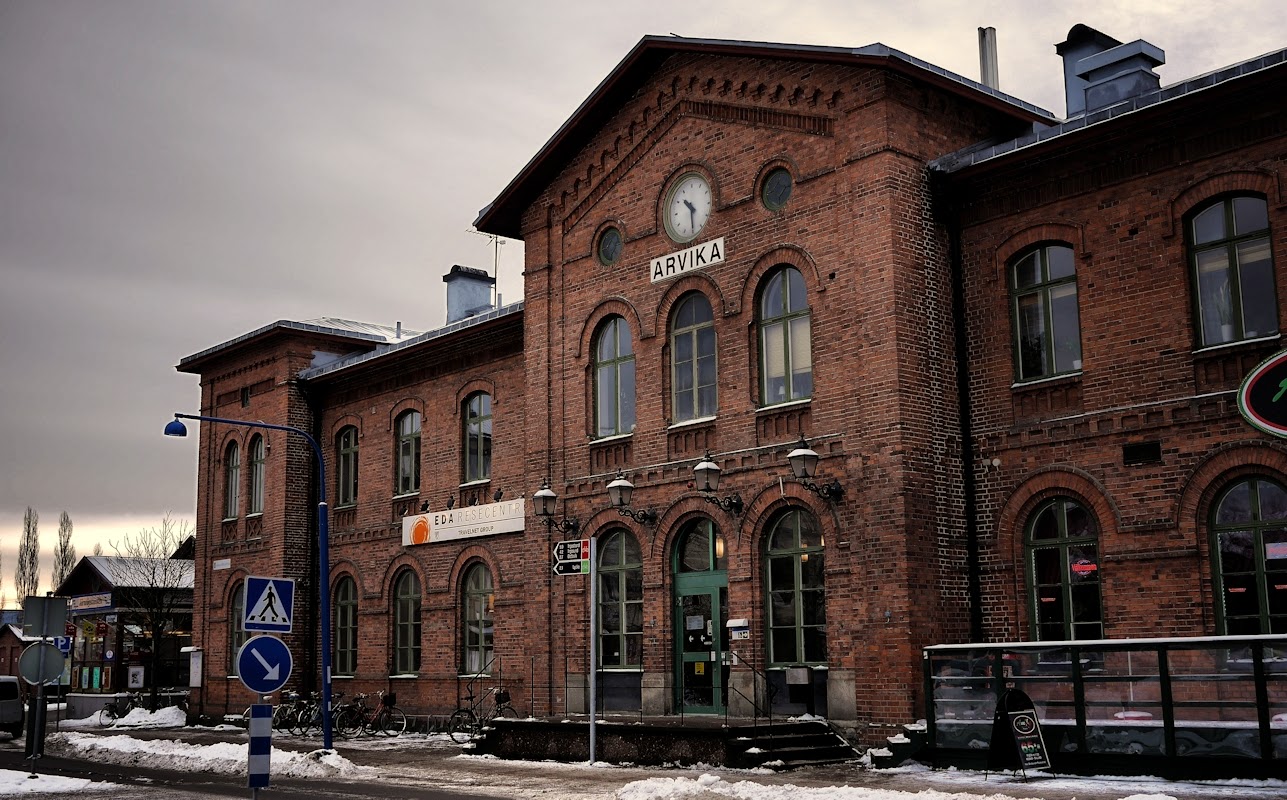 An incredible big and impressive building - probably telling a story of former citizens ambitions for the township when they opened the station in 1871.

Inside the train station 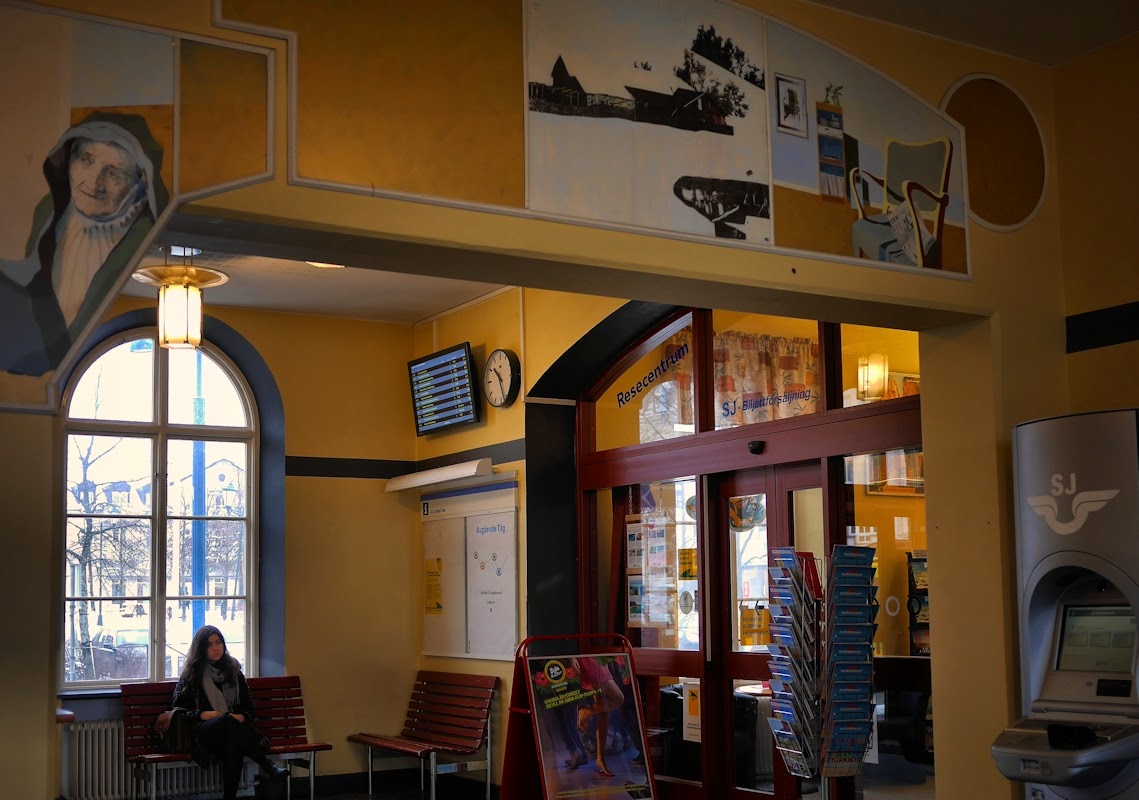 A traditional waiting hall and some wall paintings that seems to have been here for some time. I wonder who the lady to the left of the wall is - surely some local character.

Even more wall paintings to see outside 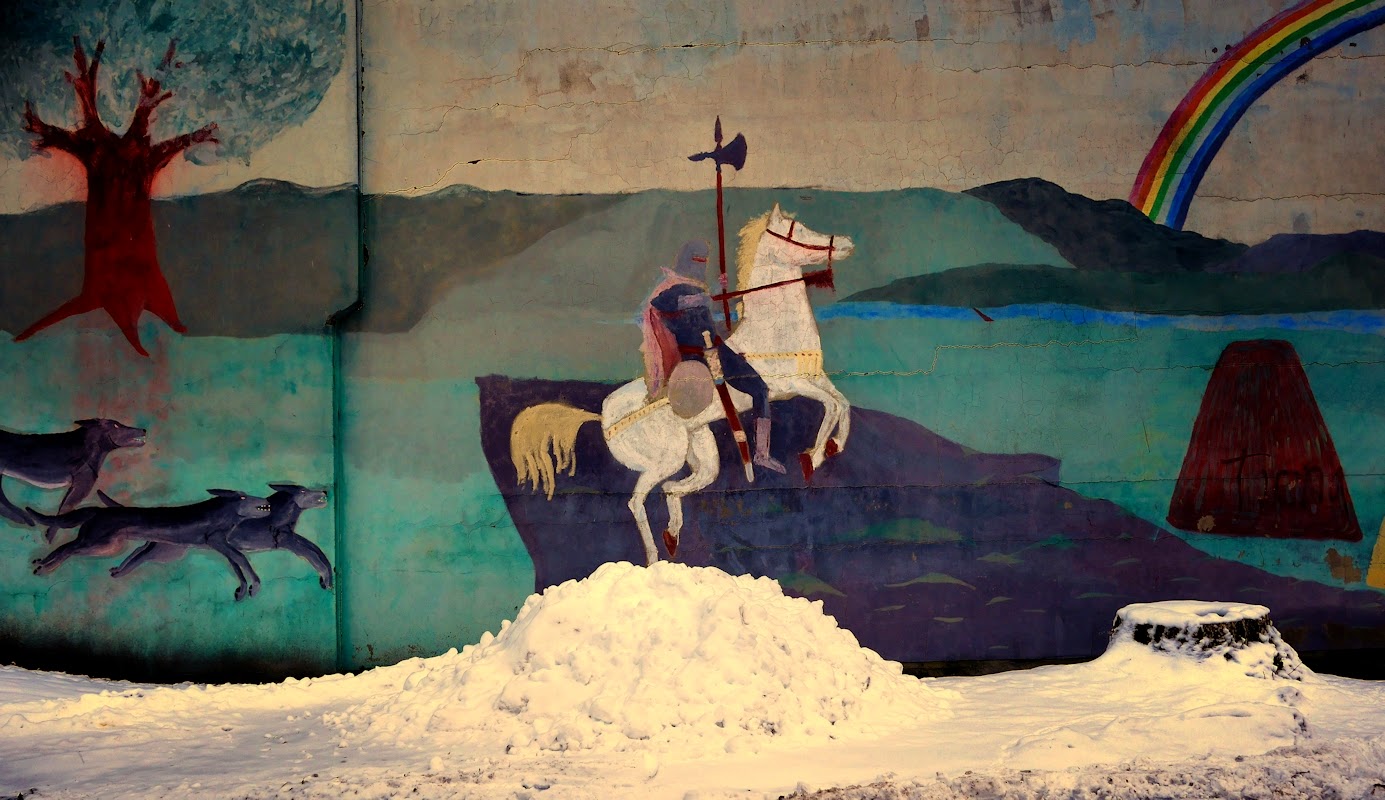 Here on the wall in the back of a communal parking place this big wall painting is for sure telling a tale of the life generations away when knights fought their way through the young Sweden, crossing lakes and forests with the wolves right behind - what a life for those brave guys...

The town hall: Stadshuset with the high tower seems also to be inspired by the old times 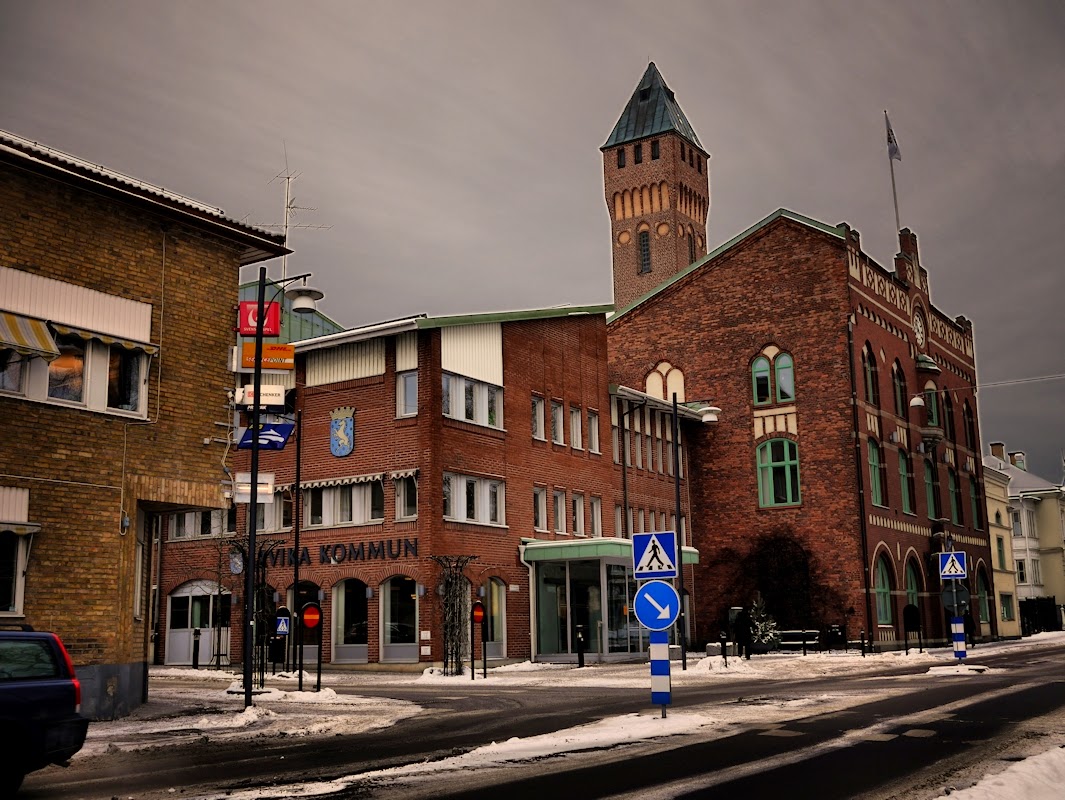 They opened the town hall back in 1904. At the time it also housed the fire brigade and the police in the municipality. Maybe the lookalike castle-tower was a place for drying up the firebrigades fire hoses.

Can this be the oldest house in Arvika? 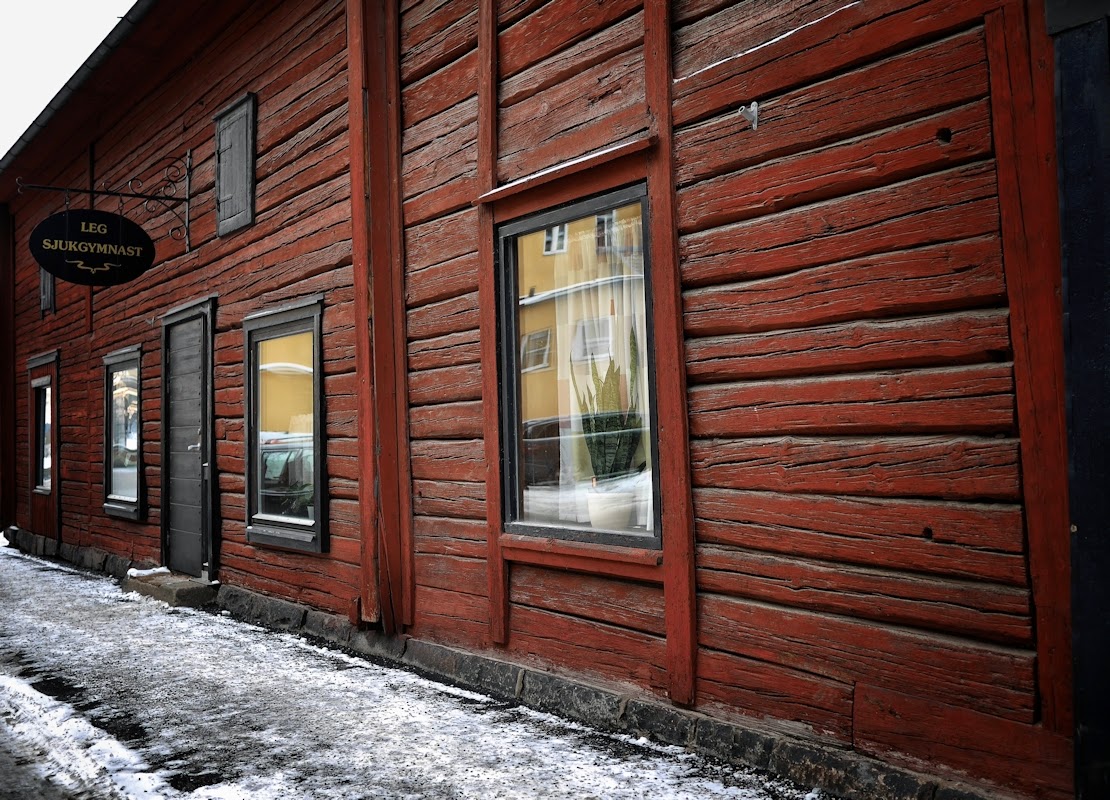 This old building must for sure have some history to tell - I guess it must have been originated someplace around 1800 - 1850. Situated in the central city also connected to a backyard with more buildings from the same period. Asking me it must have potential to be the city museum... 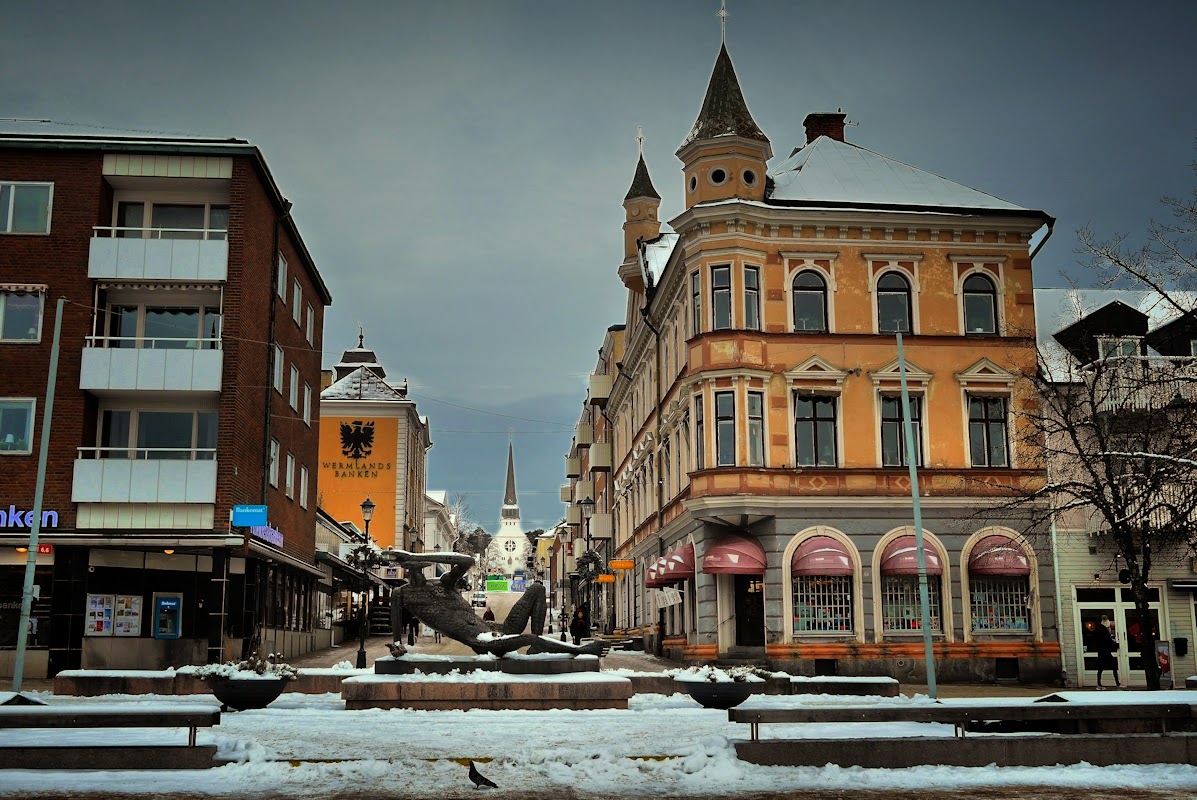 The grand station building is on the one side of the central town square. The other side can be seen here - with a street leading up to the church in Arvika - for me:Typical for so many similar small town places in Sweden

What to do in Arvika a winter day in February?

One can say much about Arvika - but you can not say that the city life was pulsating this winter day.
Out on the frozen lake I could spot some few skiers and hikers while I spent an hour sitting at the local Ohlsons restaurant having my lunch.

This was surely some good friends meeting for lunch this Friday in February. Lots of things to talk about and enjoying their company around the table in Ohlsons Restaurant.

It was interesting to visit the township of Arvika this winterday, looking for interesting objects to make a photo of. Before lunch almost no people to see outside - hopefully they thrive the people who live here day in and day out through the years.