The Spectacular Atlantic Road at the WestCoast of Norway 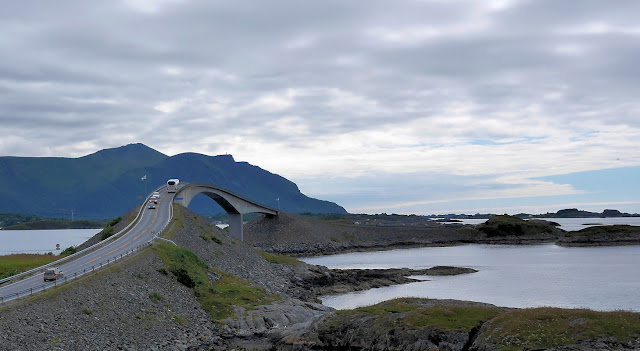 The Atlantic road. A few kilometers of road along the Atlantic coast that have become a "must" for many visiting this part of our country. Maybe it is close to be a "tourist trap" as only a few kilometer is of real interest - as here with a spectacular bridge as shown.  But of course it starts in the north with a tunnel of app. 6 km and reaching a depth of 250m crossing under a fjord between Kristiansund and Averøya.

Some more from the net:
A unique stretch of road which takes you right out to the ocean’s edge. In 2005, the road was voted Norway’s «Engineering Feat of the Century», and is also known to be the world's most beautiful drive. It connects Averøy with the mainland via a series of small islands and islets spanned by a total of eight bridges over 8274 meters. The road was opened in 1989 and is toll free. The Atlantic Road has National Tourist Route status and the entire stretch between Bud and Kristiansund is one continuous experience packed with coastal scenery, culture and history.