At the soil of ancient Oslo, Norway there is a new neighbourhood: Sørenga - Fjordbyen (FjordCity)

We are out on Sørenga, looking back to the new skyline of Oslo East. To the left, foreground, the signal building with the Oslo Opera backed by the former high Post building and the Hotel Oslo Plaza. The new high buildings in the back is the new so-called Barccode buildings, private estates and offices. The significant big grey building in front (Middle) is the new Edvard Munch Museum. The panorama ends to the right in the new fine apartments buildings at the formerly quays of Sørenga right under the old Ekeberg hill - where the very first settlers found a place to live in the stone age.

New discoveries by archaeologists indicate that some of Oslo’s history may need to be re-written. Field research on the Ekeberg Plateau, which rises above Oslo’s eastern harbour, has unearthed evidence of settlements from 8,000 BC, much older than those previously found.
“This is the most exciting and complex work I’ve been involved with in my seven years at Byantikvaren (the city’s cultural preservation agency),” archaeologist Kristine Reiersen told newspaper Aftenposten .

She and her colleagues have been working on the Ekeberg Plateau and have found many more signs of Stone Age life than expected. Until now, most historians and archaeologists traced Oslo’s earliest settlements to around 8,000 years ago, or 6,000 BC.

Now they have found evidence of settlements from 8,000 BC, 2,000 years older. They found what they claim are remains of a place where eight to 10 persons lived on what at the time was waterfront property. The land was pushed up from the sea around 10,000 years ago, after the last ice age, Egil Mikkelsen of the Museum of Cultural History told Aftenposten .
The new Edvard Munch Museum in Oslo. 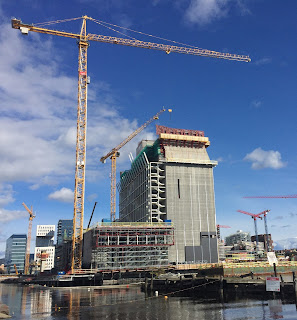 Also the present Munch Museum is placed in the East end of Oslo. Still there was a long and tough political debate before also the new museum was placed right here in the top modern Fjordbyen.

Background. In the present museum at Tøyen an increasing number of visitors come and additional space was needed in order to exhibit more of the collection. The Munch Museum has long outgrown its current premises. In May 2013, after years of debate, the Oslo City Council voted to build a new Munch Museum in Bjørvika in the Oslo's harbour area, close to the Opera. Spanish architects Herreros Arquitectos won the design competition and the new museum will be completed in 2019.

There are several restaurants in the area. our choice for lunsj was the popular Cargo Restaurant. here a short timelapse: